The new London Plan (Policy G5) now requires all major developments to contribute to the greening of London by including ‘urban greening as a fundamental element of site and building design’.  Policy G5 requires ‘urban greening measures’ to be incorporated into new developments – such as green roofs and green walls.  These types of measures were encouraged in the previous version of the London Plan, and, in themselves, are nothing new.  Policy G5 does, however, differ from its predecessor by seeking to fundamentally shift the approach taken to incorporating landscaping (or more accurately, ‘urban greening’) into new development.

The policy is specifically designed to avoid proposed plans being ‘greened up’ at the last minute with, for example, the addition of a token green roof or the incorporation of grass lawn over a surplus corner of land.  Instead, Policy G5 requires urban greening to be given careful considered from the outset of the design process and places a very clear emphasis on quality over quantity.  Policy G5 is supported by a useful – albeit fairly simplistic – Urban Greening Factor (UGF) calculator, a tool that effectively evaluates and scores the provision of urban greening for new developments.   The Mayor has also now published draft Urban Greening Factor Guidance for consultation.

The ‘green space factor’ concept was first used in Malmö, Sweden and versions have since been successfully adopted in other European cities.  Policy G5 has real potential to incentivise the provision of high quality greening in London’s new developments, which is essential as the city continues to grow and densify.  In this article, we briefly outline what the UGF is, the key takeaways from the draft UGF guidance and our thoughts on how developers should factor in the Urban Greening Factor.

What is the UGF?

The UGF is a model developed by the Mayor to calculate the amount of urban greening a proposed development delivers.  A factor, or score, is attributed to different types of greenery which is then multiplied by the area of cover (sqm) within a site.  The scores for each surface type are added together and divided by the total site area to give a proposed development its UGF.   The scores range from 1 (the highest) for semi-natural vegetation or wetlands through to 0 for sealed surfaces such as concrete and asphalt.  The Mayor recommends a target score of 0.4 for ‘predominately residential schemes’ and a target score of 0.3 for ‘predominately commercial schemes’.

The UGF is currently only applied to major developments but the longer-term approach is for Boroughs to introduce their own UGF targets in Local Plans.  Importantly, this provides an opportunity to take local circumstances into account, and, if appropriate, set a preference for specific surface cover types. If a Borough has an identified deficiency in tree cover, a higher score could be attributed to new trees.

Local targets are already starting to materialise in some new and emerging Local Plans.  For example, the emerging City of London Local Plan 2036 proposes a UGF target of 0.3 ‘as a minimum’ for all major developments.   The supporting text advises that the City Corporation will take a flexible approach where delivery of the target UGF would ‘detract from the heritage significance of a building or conservation area’.  Others, such as Islington’s emerging Local Plan and Hackney’s adopted Local Plan (2020), are opting to mirror the London Plan’s interim UGF targets.

How should the UGF be applied?

In practical terms, the UGF calculations should be submitted as a stand-alone colour-coded drawing alongside a completed UGF table.  Below is an example of an UGF plan we submitted for a major application in Barnet where a UGF factor of 0.447 was achieved. 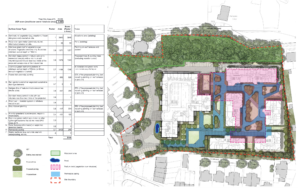 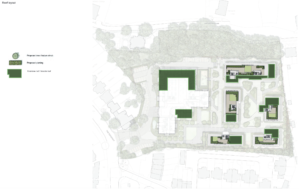 Drawings prepared by The Landscape Partnership

The UGF calculator is useful in that it prioritises and gives weights to certain surface cover to encourage ‘higher-quality urban greening, rather than large quantities of low-quality features’.  The same site can therefore achieve a very different score depending on the choice of greenery.  For example, not all green roofs are equal.  Depending on the depth and structure of a green roof, the same area of green roof can achieve a score between 0.3 and 0.8.    Similarly, an area of semi-natural open water is given a score of 1, whereas the score for a chlorinated water feature drops right down to 0.2.  A green wall on the other hand, scores 0.6 regardless of the system used.  It is also important to note that the retention of existing features counts towards the UGF score.   In the above example, the retention of the existing woodland area along the northern part of the site made a significant contribution to the overall UGF score which would have been difficult to match with new greenery.

UGF is, however, a fairly simplistic model and the UGF drawing only really presents the end product. In practice, many factors will have fed into a landscape design including site constraints, budgets, maintenance issues, and local circumstances – as well as other policy requirements such as biodiversity, amenity, drainage etc.  There will always be some juggling required between these, sometimes competing interests and there may be valid reasons why a higher scoring surface cover cannot be accommodated on a particular part of a site. The GLA therefore encourage applicants to support their UGF drawing with a written narrative (in the Design & Access Statement or Landscape Statement) briefly explaining the rationale behind the proposed urban greening strategy.

The GLA also place particular importance on the need to consider a site’s greening within its local context.  The starting point for considering urban greening should be to consider how the site sits within the surrounding area i.e. to look beyond the redline boundary.   For example,  there may be an opportunity to extend an established green space or create a new accessible green link.  There may also be potential to help address a specific local deficiency in say, open space, or tree canopy cover.   Again, the way in which a scheme responds to local context should be explained in the submission.

The UGF Guidance encourages applicants to look for synergies between urban greening and other policy requirements.  With clever design, one greening option can tick more than one box.  The Guidance cites the example of a SuDS system being designed to also provide natural play opportunities.  In the same vein, the GLA confirm that they will consider bio-solar roofs positively to avoid the potential conflict between roof mounted photovoltaics and green roofs.

Generally, Policy G5 and the UGF are designed to encourage a much more considered approach to urban greening in new development to ensure it is embedded in the final design.   Given that meeting the UGF target score will likely have implications for other design decisions, Policy G5 specifically requires urban greening to be ‘considered from the beginning of the design process’.  The UGF Guidance gives the example that ‘if a lack of space at ground level may result in non-compliance with the relevant UGF target score, the necessary structural considerations should be integrated early in the building design process to accommodate the required specification for green roofs and/or green walls to meet the UFG target score’.

This approach requires a landscape architect or specialist to be appointed early in the design process and to be given the scope and freedom to liaise with the other members of the project team – in some cases, this will represent a big change from the accepted approach of dealing with landscaping towards the end of the design process with details secured by way of conditions.  The UGF Guidance does confirm that landscape design can be a reserved matter if an outline consent is sought.  The outline application should be accompanied by a UGF calculation based on an illustrative landscape plan and other information to demonstrate that the UGF target will be feasible at the detailed design stage. A condition should then be attached to the outline consent requiring the final UGF calculation to be submitted as part of the reserved matters application, and that the UGF target is to be met.

The UGF and Biodiversity

As a final note, it is worth mentioning that the UGF Guidance emphasises the opportunity urban greening provides to improving biodiversity – particularly as many London sites start with a low baseline level of biodiversity.  The UGF Guidance specifically states that ‘Applicants should ensure that any Preliminary Ecological Appraisal Reports or Ecological Impact Assessments they commission highlight opportunities for urban greening to deliver biodiversity gains, and that these documents are used to inform the Project Design Brief’.

Generally speaking, the highest scoring surface cover has the highest potential to enhance biodiversity.  However, this is not always the case and the GLA has published an Urban Greening for Biodiversity Net Gain: A Design Guide to assist.

The UGF also sits separately to the mandatory requirement to provide ten per cent biodiversity net gain (BNG) introduced this week in the Environment Act 2021.   BNG is calculated using Biodiversity Metric 3.0, which focuses solely on biodiversity, and is therefore quite different to the UGF calculator. Whilst this adds a layer of complication, the GLA is finding that schemes which meet UFG scores and provide high quality greening, generally meet BNG targets (largely due to the low baseline of many London sites).

Overall, the Urban Greening Factor is a well thought out policy concept and, importantly, is here to stay (at least for major developments in London).  Perhaps the two key messages are that London Plan Policy G5 requires landscaping to be considered early on in the design process and it’s all about quality over quantity.

If you have any queries about the Urban Greening Factor or Biodiversity Net Gain, please feel free to contact one of the Firstplan team.